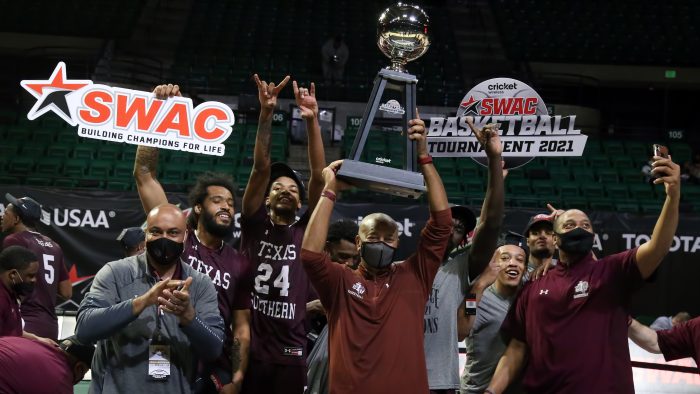 Norfolk State needed just two victories to win the MEAC tournament, walking straight to the MEAC title game after top-seeded North Carolina A&T, its semifinal opponent, was forced to withdraw from the tournament with a positive COVID-19 test. The Spartans won the title with a win over Morgan State 71-63.

Texas Southern needed consecutive wins against the top-two seeds in the SWAC that went undefeated in league play this season. Michael Weathers hit a game-tying, season-saving 3-pointer to send the Tigers’ semifinal game against No. 2 seed Jackson State into overtime, with the Tigers eventually winning. Texas Southern then destroyed top-seeded Prairie View A&M 80-61 in the SWAC championship game.

For Norfolk State, it’s just the second trip to the NCAA tournament in school history and the first since the No. 15 seed Spartans’ upset win over No. 2 seed Missouri in the 2012 tournament.

For Texas Southern, it’s the school’s fifth trip to the NCAA tournament in the last six tries (the team didn’t reach the tournament in 2019, and the entire 2020 tournament was canceled).

Record: 16-8 overall, 10-3 in the SWAC (third place in the conference behind Prairie View A&M and Jackson State)

How they got here: Received automatic bid after beating Prairie View 80-61 in the SWAC tournament. Texas Southern had lost to Prairie View in both regular-season meetings.

Coach: Johnny Jones is in his third season with the Tigers. This is the second trip to the NCAA tournament as head coach for Jones, who previously led LSU to the tournament in 2015, and his first trip as head coach at Texas Southern.

Players to watch: Michael Weathers, a senior guard, averaged 15.6 points and 5.2 rebounds this season and hit the team’s biggest shot of the year: a game-tying, buzzer-beating 3-pointer that forced overtime against Jackson State in the SWAC semifinals. Weathers, named to the All-SWAC first team and the league’s newcomer of the year, had previously played at Oklahoma State and Miami (Ohio).

John Walker III is a 6-foot-9 inside force, shooting 59.9% from the field while averaging 12.0 points per game. He’s in his second season at Texas Southern after starting his college career at Texas A&M.

Joirdon Nicholas, a 6-foot-9 forward, adds more inside force for the Tigers as he averaged 11.3 points and a team-high 7.0 rebounds. Nicholas played previously at Montana and Stephen F. Austin.

Possible round of 64 opponent: Michigan, which received a No. 1 seed despite losing three of its last five games, including a loss to Ohio State in the semifinals of the Big Ten tournament. For Michigan, it’s the third No. 1 seed in school history and the first since the 1992-93 season.

How they got here: Norfolk State defeated Morgan State 71-63 in the MEAC championship game. The Spartans received a bye into the championship game after North Carolina A&T, the league’s Southern Division regular-season champion, was forced to withdraw from the tournament because of a positive COVID-19 test.

Coach: Robert Jones is in his eighth year at Norfolk State and is making his first trip to the NCAA tournament.

Players to watch: Devante Carter, a 6-foot-3 senior guard, averaged 15.5 points, 5.3 rebounds and 4.0 assists to lead the team in all three categories in his first season as a full-time starter with the Spartans.

Joe Bryant Jr., in his second season as a starter, averaged 11.6 points and 4.3 rebounds. He scored 30 points in a blowout quarterfinal win over North Carolina Central.

Possible round of 64 opponent: Gonzaga, the tournament’s top overall seed and the only undefeated team in Division I basketball.

Last NCAA tournament appearance: It’s been nine years since the shocker heard around the basketball world, when Norfolk State, a No. 15 seed, upset No. 2 seed Missouri in a first-round game. It was the fifth time in NCAA tournament history that a No. 15 seed beat a No. 2.