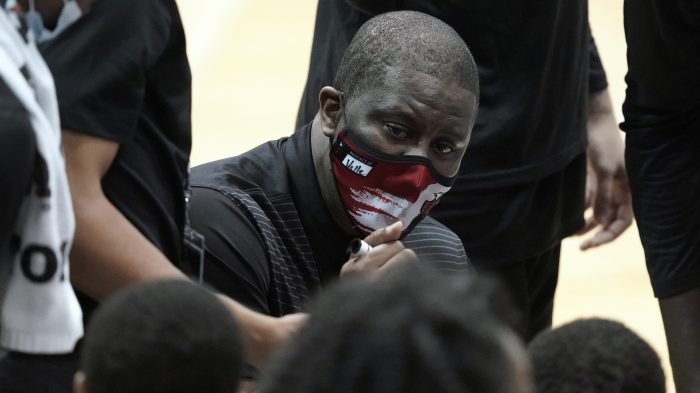 North Carolina Central, the three-time defending MEAC men’s basketball tournament champ, spent this entire season in a deep hole it struggled to get out of because of COVID-19.

N.C. Central fell behind Norfolk State 17-0 in the first seven minutes, missing its first nine shots and turning the ball over five times, and never recovered, losing 87-58 in the Mid-Eastern Athletic Conference (MEAC) quarterfinals Thursday night at the Scope in Norfolk, Virginia.

At 5-9 in a season constantly disrupted by the coronavirus pandemic, its run of MEAC tournament titles and NCAA tournament berths is over.

The season – head coach LeVelle Moton, the players and the ups and downs of the schedule – is being chronicled in the eight-part ESPN+ documentary Why Not Us: North Carolina Central University Men’s Basketball. Part four streamed the day before the Eagles’ debut in the tournament that they won the last three times it was played, 2017, 2018 and 2019.

The 2020 tournament was canceled a year ago when the pandemic struck full force as the festivities in Norfolk began. N.C. Central entered that tournament as the regular-season champ and top seed, and Moton and the players had spoken of finishing what they couldn’t in 2020.

Instead, as Moton recounted after Thursday’s loss, the team went through four separate two-week quarantines, losing a minimum of 56 days, and at times could only practice 2-on-2.

They played the second-lowest total games of the MEAC’s men’s teams, only above Howard, which ended its season last month after playing just five times. South Carolina State opted out of the tournament after a late-season COVID-19 diagnosis in the program.

“These kids have been through so much. I just commended them for showing up,” Moton said Thursday night. “Every other program in the country that was affected by COVID the way we were, they folded and decided to no longer continue the season. We decided to continue, and when you decide to continue – yeah, that’s a lot of heart and whatever, but the other thing is, you risk the embarrassment of not being ready and prepared.”

The Eagles’ only worse loss was by 30 in their season opener at Iowa.

The winner of this quarterfinal winds up with a pass straight to the tournament championship game because rival North Carolina A&T pulled out of the tournament Thursday after a positive test in the program. The Aggies had won their division and had a bye into Friday’s semifinal. 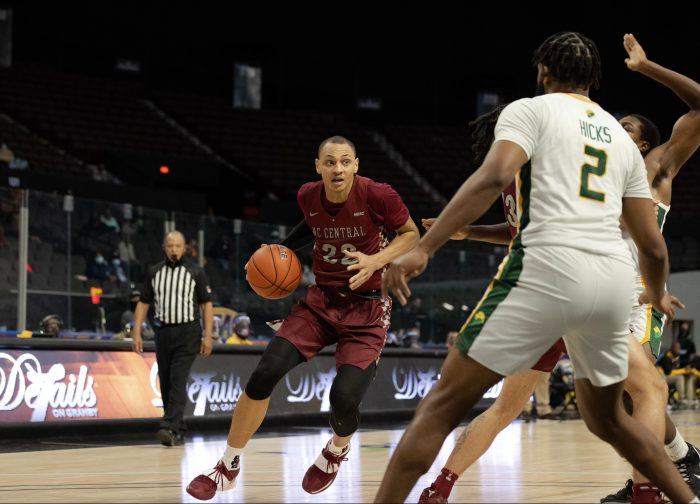 Norfolk State is heading to its third final in four years. N.C. Central had beaten the Spartans in the final in two of its three tournament victories.

Moton passed on reminiscing about past teams, saying it would be “an injustice” to those who played through the chaos of this season. “It’s been a whirlwind,” he said. “It kind of hurts me to even go back and think about it. It was unreal, I don’t have the adjectives to describe it.”
The nightmare start against Norfolk State, he said, was not unexpected under the circumstances.

N.C. Central was led in scoring by two of its seven seniors, C.J. Keyser’s 19 points and Deven Palmer’s 14. Both figure prominently in Why Not Us.

Even in the 29-point loss, Moton said he was proud that he was as patient as he was as a coach this season, and that the players were as determined to play as they were.

“I was just honestly happy that they showed up. That’s what I told them in the locker room,” he said. “I was happy that those who were available to show up, showed up.”