An incredible journey from Ohio State to Florida A&M, where he won HBCUs’ only national football title
19-March-2021 · 315 Views 0 0 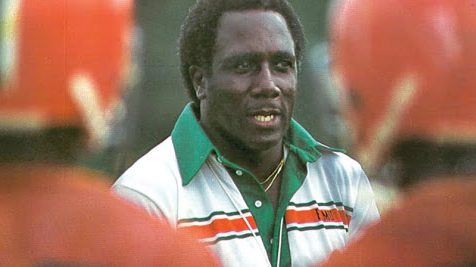 A few weeks before graduating from Ohio State in 1968, hometown hero Rudy Hubbard was invited to speak at the postseason sports banquet for his high school in Hubbard, Ohio, a town outside of Youngstown.

Although Hubbard had rushed for 103 yards and two touchdowns in a 1967 upset of rival Michigan in his final game, he was used sparingly, at best, in a crowded Buckeyes backfield.

Not only did Hubbard use his speech to vent his frustration over his lack of playing time, his tirade was witnessed by Ohio State head coach Woody Hayes, who was also invited to the banquet. Hubbard spoke his unapologetic truth, believing he wouldn’t see Hayes again. 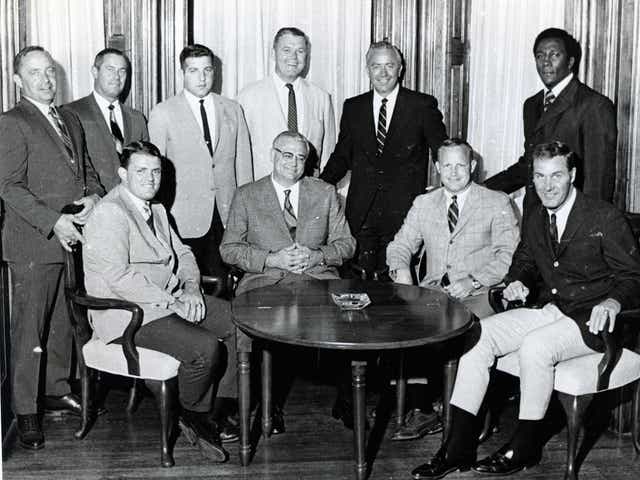 “I return to [Ohio State] and I get a call from Woody wanting me to come to his office,” Hubbard said. “I’m thinking he’s going to go off because of the things I said at my high school. I get there and he offers me a job as running backs coach. It reminded me how Coach Hayes didn’t hold grudges against anyone that played or coached for him.”

Hubbard became the Buckeyes’ first Black assistant coach in 1968 (and the third Black assistant in the Big Ten Conference), and blossomed into a stellar recruiter. Later, as a head coach, he led Florida A&M (FAMU) to record-setting seasons and the school’s first and only national football title by a historically Black college and university (HBCU).

Those efforts earned Hubbard an induction into the 2021 College Football Hall of Fame. The Classic for Columbus scholarships and awards committee will honor Hubbard this summer with a scholarship in his name for HBCU students who attend graduate school at Ohio State.

“Woody Hayes used to say most people will have at least three opportunities to do something great,” Hubbard said. “ ‘Always look for it, and don’t let it pass you by.’ I’ve had a couple of times already. This just seems like it’s my year.”

FIRST QUARTER
Coaching was not on Hubbard’s immediate list of occupations after playing college football. He considered playing in the CFL, but the low salaries were a deterrent. So Hayes’ offer after graduation was right on time.

“I received this threatening letter addressed from St. Petersburg, Florida,” Hubbard said. “The entire letter was typed out and it was signed by four people with their first initial and last name. It basically said I’d better not take the job.”

There was another racist incident that year in which Hubbard was harassed by a security guard at a complex where he shared an apartment with a white roommate.

Each evening, Hubbard would run wind sprints to stay in shape. On this day, a car quickly came around a corner and followed Hubbard. A man jumped out, ran up to Hubbard, pushed a gun to his back and bent him over a car.

“My roommate yells out to the security guard, asking him what is he doing,” Hubbard said. “The guy apologizes to my roommate, not me, so when he put his gun away, I punched him.”

Once on the field, Hubbard joined one of the best teams and coaching staffs in college football history.

The ’68 team – called the “Super Sophs” – had 11 All-Americans and six NFL first-round picks, including Jack Tatum. The team won the national championship with a Rose Bowl victory over the O.J. Simpson-led USC Trojans.

“We had one heck of a team, and everyone was trying to find a place to go,” Hubbard said of the other assistant coaches. “You don’t know if it was because of a lack of our low salaries or they didn’t want to be with Woody. But when you win a championship, it’s often a good time to move on.”

SECOND QUARTER
Hubbard still had plenty of work before it would be his turn to leave. Following the national championship season in 1968, the Buckeyes were ranked No. 1 all year until they were upset by Michigan in the final regular-season game. The Buckeyes avenged their loss with a victory over Michigan the following season, but fell in the Rose Bowl to Stanford in 1971.

Hubbard’s recruitment of running back John Brockington, a future first-round NFL pick, and John Hicks, a two-time All-American, helped establish his reputation as a keen recruiter. He hit the recruiting jackpot in 1972 with some of the best players in school history: running back Archie Griffin, quarterback Cornelius Green, wing-back Brian Baschnagel and, a year later, fullback Pete Johnson.

Freshmen were eligible to play for the first time in ’72, and Hubbard convinced Hayes to play Griffin in the opener against Iowa. Griffin fumbled on his first carry. Hayes quickly sent him to the bench.

In the following game, Hubbard urged Hayes to play Griffin early. In 21/2 quarters against North Carolina, the freshman responded with a school-record 239 rushing yards.

Despite Hubbard’s recruiting success, his salary of $18,000 was among the lowest in college football. With the support of the other assistant coaches on staff, Hayes was asked to do something special for Hubbard because of his solid recruiting year.

Hubbard chuckled at the memory.

“Someone had given Woody a wine flask that was hanging on his wall,” he said. “Woody reached back and gave that to me. Woody always said no one should coach for money, but for the love of the game. He always returned his raises.”

THIRD QUARTER
FAMU, one of the greatest HBCU football programs outside of Grambling State, began to experience chips in its armor after legendary coach Alonzo Smith “Jake” Gaither retired in 1969. Gaither won 22 of 25 conference titles, six Black college football championships and went unbeaten or lost only one game in a season 15 times during his career. His final game was a victory over Grambling and the great Eddie Robinson in the Orange Blossom Classic.

But the Rattlers struggled to find a successor. Three coaches followed and all three failed. FAMU was 21-22 over three seasons following Gaither’s retirement.

Something had to give.

FAMU began its search for a coach that included 28-year-old Hubbard. Gaither, the school’s athletic director at the time, was familiar with Hubbard because he held annual coaching clinics on campus that included Hayes and Alabama’s Paul “Bear” Bryant.

“Woody didn’t want me to leave because he said FAMU lacked resources, but it didn’t matter because I was ready to go,” Hubbard said. “I wanted control of my own football program.” 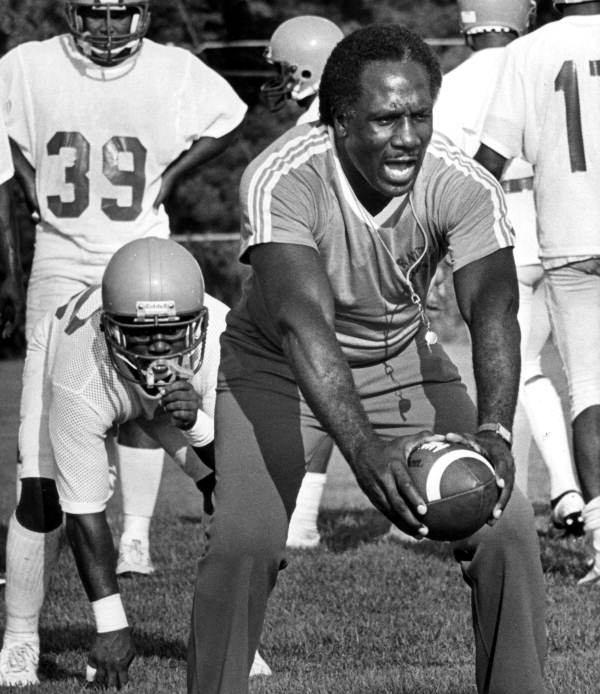 Control, however, did not mean immediate success. Hubbard even had trouble getting into his first high school game to scout without an ID.

Hubbard described the incident in a Sports Illustrated interview: “Look at this Rose Bowl watch with my name on it,” Hubbard said. The ticket man shot back, “Mickey Mouse has his picture on his watch and I wouldn’t let him in either without identification.”

Hubbard improved the Rattlers to 6-5 in his first season, but skeptics remained.

“They wondered out loud, ‘How is this guy from a white school going to tell us how to play football?’ ” Hubbard said.

There was only one way. Hubbard instituted lessons he learned from Hayes. Off the field, it was suits and ties on road trips and unconventional instruction in public speaking.

“He’d blow the whistle during practice, get on one knee and have one of us read poems out loud to the team,” said quarterback Albert Chester, who finished 33-3 in his career. “When he called on you, you couldn’t say no.”

And like Hayes, Hubbard was a disciplinarian. One of his toughest challenges came in his often-volatile relationship with Nate Newton, a future All-Pro guard who would win three Super Bowls with the Dallas Cowboys.

“In college, I was wild, notorious or any kind of not so good word you can think of,” Newton said. “Coach Hubbard was always calling me in his office for something I did. Fortunately he cared, and it made a difference in my life.”

On the field, Hubbard instituted Ohio State’s I-formation. But unlike Hayes, Hubbard allowed his quarterback to audible at the line. The defense ran a 5-2 scheme that’s closer to today’s 3-4.

Suddenly, fan doubt began to change. FAMU went 9-2 in his second season and 6-3-2 in his third season.

FAMU would set a new standard for HBCUs over the next two seasons.

FOURTH QUARTER
The Rattlers finished 1977 as the only undefeated team (11-0) in the country, regardless of division, and won a Black college national championship. It was the last undefeated team in school history and one of six dating to the 1930s. The “Gang Green Defense” ranked first nationally in Division II scoring defense, rushing defense and total defense.

Before the ’78 season, Hubbard petitioned the NCAA for a move to I-AA (now called FCS) and it was granted that fall. It meant a more competitive schedule and more money for televised regional games.

It was a memorable season. The Rattlers held the country’s longest winning streak until it was stopped at 17 in a loss at Tennessee State. They regrouped and went on to win the inaugural I-AA national championship in a 35-28 victory over UMass in Wichita Falls, Texas, becoming the first and only HBCU to win a national title. 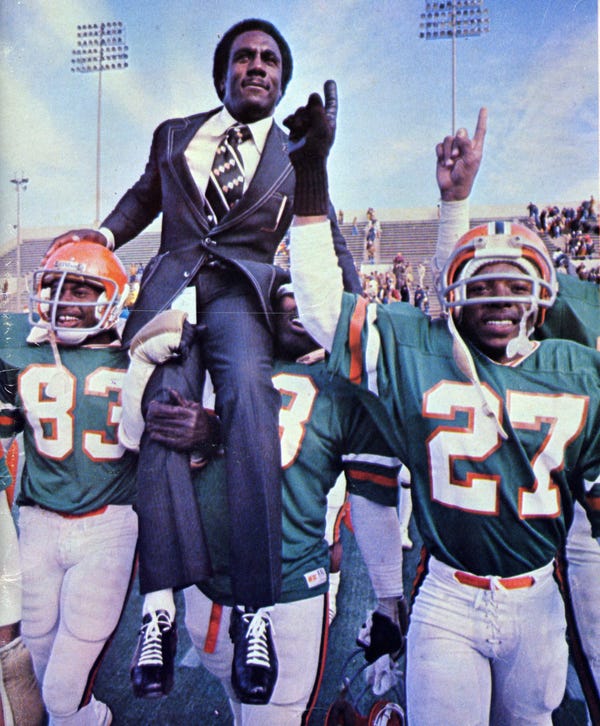 “That can never be taken away from us,” Chester said. “It remains monumental for Black college football.”

Success continued for the Rattlers the following season when they upset the Miami Hurricanes 16-13 in Howard Schnellenberger’s first season.

“They were pretty upset with that loss because they beat us pretty bad the next season,” Hubbard said.

There were troubling times, too. In February 1980, Hubbard discovered a 4-foot-tall cross burned less than 10 feet from his front door. A month later, “KKK” was scrawled across his fence.

Several neighborhood kids were eventually arrested. It was discovered the juveniles were upset that Hubbard had purchased the house where the kids routinely swam in the pool.

“Two Black officers were on the surveillance beat and they caught the kids,” Hubbard said. “The father of one of the children told the chief, ‘How dare you send two n—–s to arrest my son.’ “

OVERTIME
After 12 seasons, Hubbard resigned in 1985 with a career record of 83-48-3. He returned to coaching in 2008 as head coach of Rickards High School in Tallahassee, Florida, and left after four seasons.

He was nominated several times for induction into the College Football Hall of Fame, and now he finally gets in.

“He should’ve been in there a long time ago,” Chester said. “I’m glad he’s alive so he can smell his roses now. I find it funny how he’s not in the Black College Football Hall of Fame.” 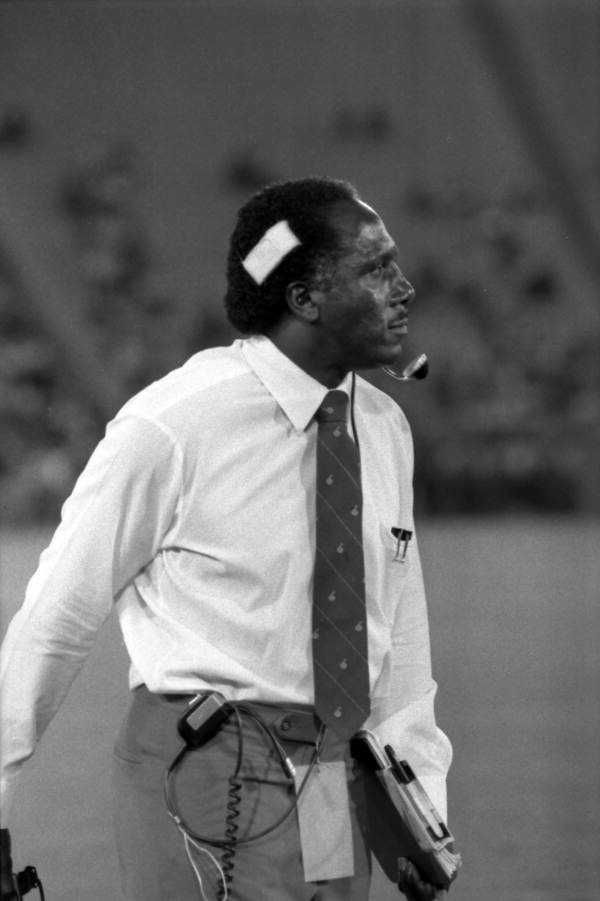 John Pace, president and CEO of Classic for Columbus, will hold a news conference on March 16 to officially announce the “42-1” award inspired by former heavyweight boxing champion and Columbus native James “Buster” Douglas, and announce the scholarship in Hubbard’s name.

“I’m honored because we did some good things at FAMU in a short period of time,” Hubbard said. “Since the announcement back in January, I’ve been on cloud nine because, unfortunately, there’s not a lot of Black coaches getting these types of honors.”